The last few years has been good for some Indie Bands I've been following. Watching bands such as The Hunna open small independent festivals in a Cathedral of 50 people, to the following year Headlining Festival Republics stage at Leeds Festival, or The Sherlock's first album release and massive nationwide tour.  Admittedly just as many haven't made it.

So who's on the radar for success in 2018? I'm not sure! But here's a list of some of the up and comings on my playlist, I'm hoping to hear more of.
I'm Really liking Yonaka - who draws similarities to Yeah Yeah Yeahs & No Doubt, and I'm also liking the sound of Sea Girls, very British Indie, think Bastille!
If you're interested in a really new raw Indie band listen to Weekend Debt, a Scottish band with influences from Arctic Monkeys & Courteeners, with a deeper twist.

Have a listen to the playlist and see what you think?

Following my previous posts I've decided to merge any new releases into 1 from now on.
So here's the latests from some of the bands in my sights. I'm not including Videos today's, but you can find these on your favourite streaming service :)


Eminem - In Your Head
OK I'm doing new tracks, but given Marshall just dropped his new album today I'd really like to call out the full thing Revival. I've only had chance to listen to it once, but it's fully packed with A class duets and it's smashing some plays on Spotify already.
Call out track has to be 'In Your Head', I mean chucking The Cranberries in? This man's a genius!

The Hunna - Dare
This band was one of the hottest albums for me for 2016 and saw a good performance at Manchester Cathedral. This is their 2nd release this year, after 'Summer' (which was a little too similar to 'Brother')

Feeder - Everybody Hurts
What more do you need? Feeder covering R.E.M... Yes!

MGMT - When You Die
It's been over 4 years since MGMT gave us some new music. Whilst they're still in the psychedelic rock, this latest track has taken a softer approach than we're used to. Worth a listen, I'm interested in what the rest of the new album will be like.


Thom Yorke - Saturdays
Radiohead frontman debuted a bunch in unreleased songs in LA this week, as well a the first live performances of some of his previous solo work. There's more than just Saturday, but that's the one I one I was most fond of. I'm on and off a Radiohead fan, and this Ibiza chill out sound from Thom Yorke adds a uplifting change to the party wind down.

15 years after 'Original Pirate Material' was released and 6years since we've had new material. Mike and the crew are back with 2 new tracks!

The Neighborhood, an amazing band, ever since I heard Sweater Weather I've been following these guys.  Thier latest single out this week Scary Love

Following on from their 2017 albums, NFG are back with a new release - 20 Years From Now

The current political roller coaster across the western world has given some good, if THE only good thing, plenty of punk material! I don't wish to be so crass about the depressing state of affairs, but music is a virtue to the escapism we so often crave. I hold onto the punk roots which opened my mind to music and life. And honestly, what is a better muse to the Anarchist Punks than Right-winged Bigotry?

We've had 30 years of Anti-Flag! ok technically it's only 20 years since their first album, 20 years since Drink Drank Punk & Fuck Police Brutality. Now 2017, we're a dozen albums in and still Anti-Flag are producing great tracks with no sign of letting up. Admittedly their was a lull in recent albums, but the afore mentioned state has given these veteran punks some gas.

American Fall, the follow up album to their 2015 release American Spring, aptly named for obvious reasons. The album is so we'll produced from start to end, the audial clarity to the story telling in the tracks. Notably the opening track 'American Attraction' which draws you in immediately with catchy lyrics and rifts.

Talking catchy lyrics, this album is exploding with them. Every song screams Bouncy Fast Paced Anthems. See 2nd track 'The Criminals', 3rd track which has more of a carnival feel 'When The Wall Falls'... 'Racist'...'Casualty'... 'I came, I saw, I believe'... 'Digital Blackout'...heck too many to mention, literally the album is hit after hit but those in bold above are my favourites.

As you can draw from the names there is a theme to the album and it's on my playlist for the long haul. If you haven't listened to it yet get on Spotify or Amazon Music and listen to it. Only downside..  it's only 11 tracks.
https://open.spotify.com...


I'll leave you with the lyrics of Racist:


Just 'cause you don't know you're fascist


You don't get a pass for your ignorance 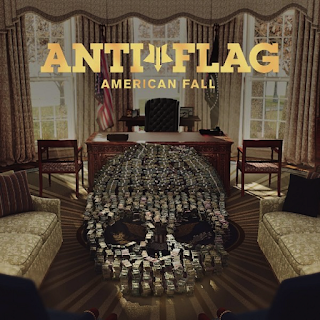 Green Day - Back In The USA