Quick heads up... This started as a short review of False Heads 2 gigs 28th September Manchester and 29th in Preston. It is a long read, but hopefully it will give you all you need to know about this trio (and their support)...

28th September
Normally after landing in from another country, be it work, an energetic holiday or relaxed holiday, all I wanna do is crash out under the duvet and pretend this world doesn't exist, until Monday morning.

Well if there is anyone who's energy is enough to pull you out of a JetLagged stupor, two days in a row, it's Luke, Jake & Barney aka False Heads. Now regular readers and followers will know these guys are one of our top hitters to see. Heck, I think this is the 4th gig this year we've been to see them.. and I'm about to tell you why, again.

I'd been awake 36hours and spent a week partying in the big apple. I'd managed to get a few hours shut eye before my phone went off, several times, it was Richard excited and wanting to do the usual pre-gig phone call. I missed it for another hour sleep (sorry, again).
Waking up, chucked on my FH tee and went out to pick up Richard for the gig.

I'm not sure legally I should have been driving, my head was fuzzy and felt like marshmallow man, but ahh nothing a little Weekend Debt and carpool karaoke couldn't clear tho.
...Tell me it's over, tell me I'm not ready....
...you bite your tongue, you clench ya jaw...

Anyway, 5pm few Jack Daniels down and were on the way to Manchester. I'm wondering if I can hold out till 10pm when the lads hit the stage at Jimmy's NQ Manchester. We have a few support acts at this sold out event, of which I have no clue about... I didn't do any homework.

Holding a few spare tickets I gave a them away on twitter, for a pint, and one of the lads who got a ticket recommended Manalishi the first support act.  Got to say these guys we're pretty good, it's early and the venue is getting packed pretty quickly, Manalishi are a borderline heavy grunge alternative band, eerily a little too vocally similar to Kurt Cobain at times. They have a raw energy that did just what they were supposed to, and warmed up the venue, they were a nice support act!

Gotta be honest I didn't even know there was a 2nd support, so given Jimmy's was now full we opted to move to the front whilst the obligatory cig break/bar run happened.
Then we got a pleasant surprise, local band called Dirty Laces came on - now when you think Manchester band, what comes to mind? Surely, It has to be, right? Well yea, following a similar image and even stage presence, these lads were like a young Oasis. It was a pleasure, they are a tight band and kinda took the oasis britpop with some hard rock / blues rifts they are an alt act you need you check out!
Key track I noted was ''In Time' 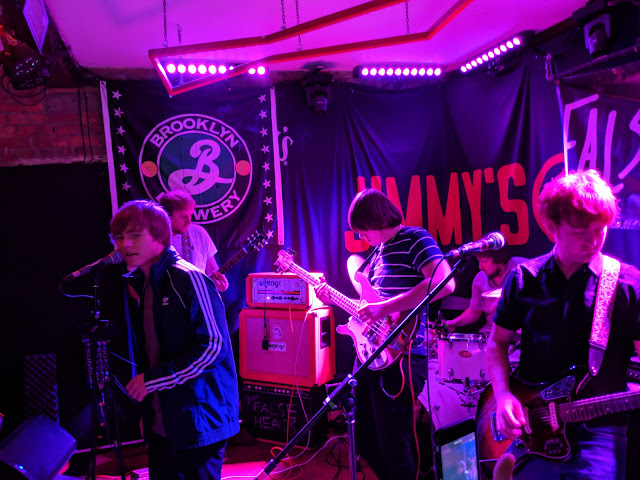 We're getting merry and a little deaf, but Dirty Laces exit to a pretty loud crowd, break down their equipment and False Heads begin to set up. It's being streamed live by Show Stream, I gave the camera guy a nudge and made sure his camera had enough swing... I could see tonight was going to crazy!

Only a few more days left and it's a sold out event, Luke won't be holding back and there is some lovely new material to showcase!

The lads start and from the outset we're hit with that hardcore punk indie crack rock False Heads are becoming renowned for. They're hitting major radio stations and getting a lot of noise from their latest track Yellow, and the available now EP, Less Is Better. 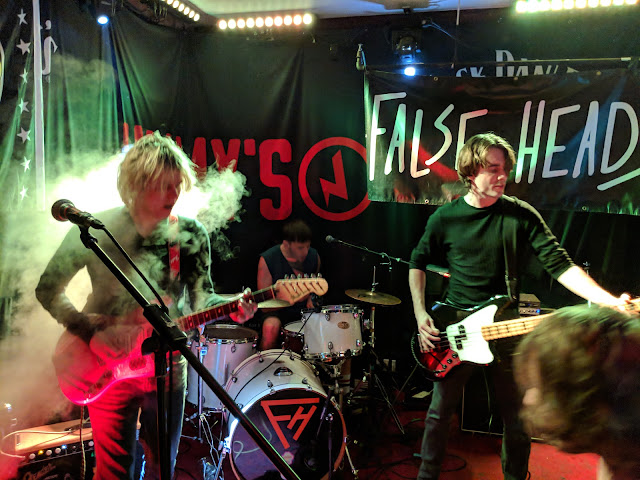 From the outset the chemistry between the lads is locked in, it's crazy, well orchestrated.
Each time I see them I see something new, it's like when you watch a film over again and see a scene in more detail.

The depth of sounds, tempo switches and more over their ability to take one of their tracks and rework it for a live audience, slowing it down at times or inserting minor changes really show off the skills and tightness of the trio. 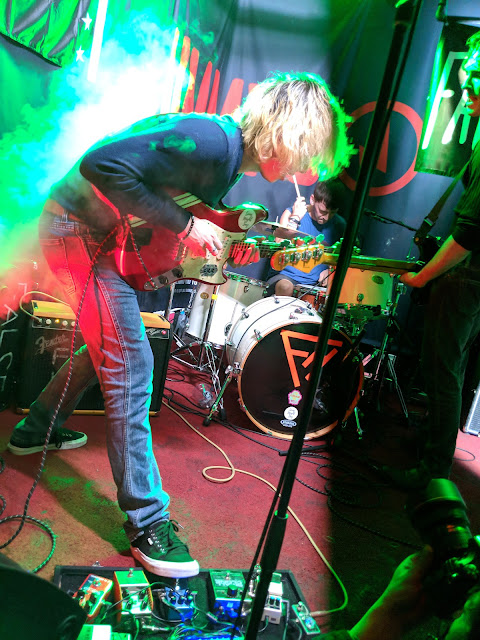 The tour was a showcase of their new EP, but we were also given a number of new unreleased tracks. Once again I'd love to give you more on those, but, well I was pretty much immersed in the gig and not taking notes. Want exclusive listens? buy a ticket :P

Genuinely though I was loving the new sounds, they seem to pick up on some of those higher toned rifts leaking into HELP YOURSELF.
If you haven't seen anything about a False Heads gig and haven't seen our previous posts. You're basically given a thorough thrashing of pure punk attitude entertainment accompanied by this mashed-genre live music 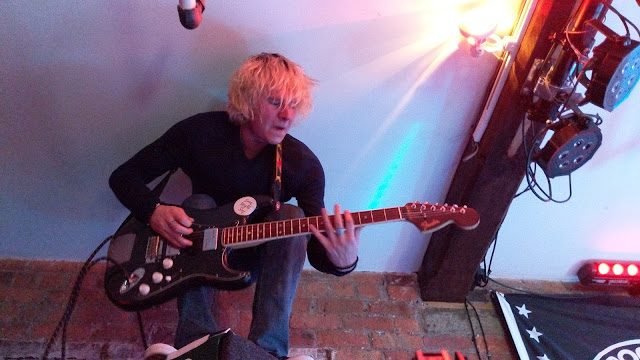 Luke does what he does and embellished the front man role more than anyone else does now-a-days... If it's the obligatory on your knees guitar solo or climbing and jumping off things, he does it. Even a little into the crowd action this time!

I'm pretty sure if this was a sell out crowd at Madison Square Garden he'd likely be smashing a guitar every track and ensuring that no amp was left unturned! Pure rock and roll. But don't let that take away from the music talents, this is, as I said, a well orchestrated act! 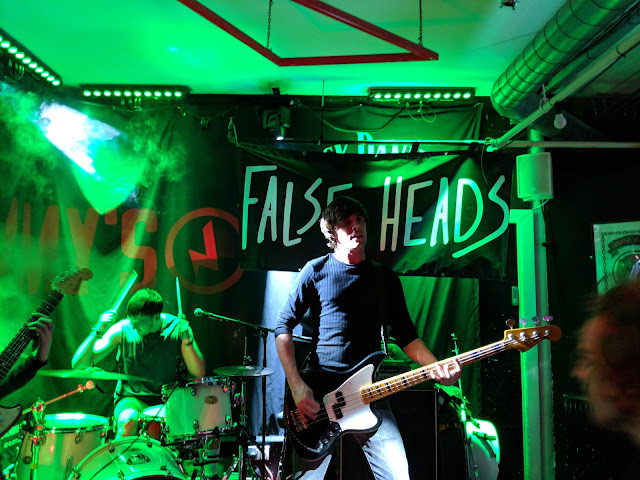 Jake spends much of the time providing that Interpol-esq, Carlos Denglar, cool, calm, collected bass playing. Often coming in for some face to face guitar strumming with Luke, the two work together well. Almost good cop bad cop routine, a nice Ying and Yang going on. That's not take anything away from Jake's performance! That guys working hard, getting hot, sweaty and providing that sweet sweet bass-line! 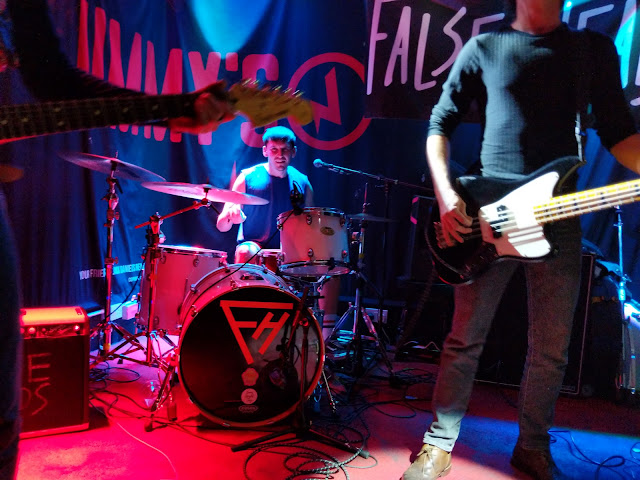 And in the back, Barney, holding it all together, smashing those drums like they were the face of that M'Fcker that just pissed on ya chips.
To be fair, Barney shares much of front man responsibilties too, providing contrasting falsetto vocals and does much of the Inbetween song talking and thanking, whilst Luke tunes the his guitar (very quickly tbh)

Collectively, 3 different characters, and I mean pretty different from their presence on and off stage, their music interests and more (check out our interview earlier, links still on spotlight).
And as I said before, it comes together in such chemistry. 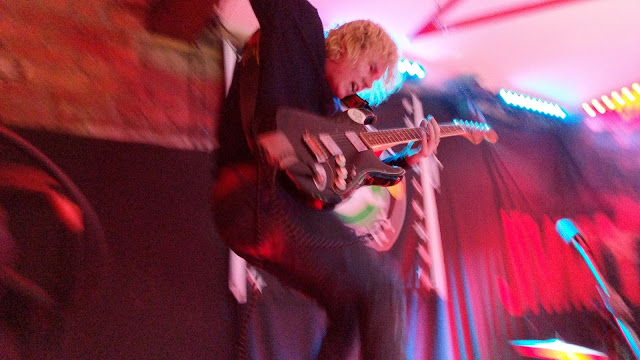 Also gotta give a nod to their mate/roadie, who I didn't catch the name of, but does a lot of mid-gig support/fixing of the slighty smashed set.

This is a sold out Jimmy's, towards the end of a European tour, the lads a likely tired and well done in. But it's a stellar performance, high octane and somehow not bone breaking?!

I noted when I listened to Wrap Up when the EP dropped on my door, that it felt almost written for Luke to do his signature ending to gigs:

And that energy is what took me from flat out exhausted to full blown excited.

Also, ha, check out this picture.
What sums up a False Heads gig more than this?! 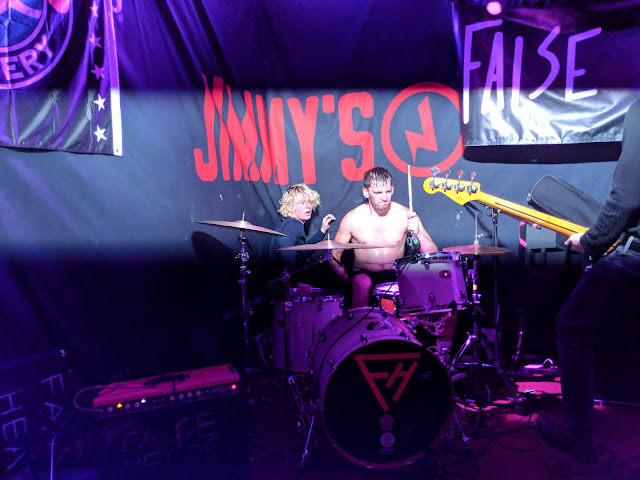 You know, I've gone on a lot about Sold Out Manchester...

29th September
The next night the lads played The Ferret in Preston, an event which sadly wasn't sold out, much to the contrary... It was later billed as a free event.
Still buzzing from the night before, still not really timezoned in, I headed up to preston and met up with colleague, friend and fellow blogger Johnny (I'm sure he will be telling you some more details from Preston's gig over at Mixing Up The Medicine so check that space and blog)

The gig was much less busy, maybe quarter capacity at best. Which you could easily allow the lads a more relaxed less buzzed gig.
Nah, nope, ha! There was as much energy beeming from the lads tonight as last night. Albiet less to climb on, that didn't stop Luke almost breaking an amp! 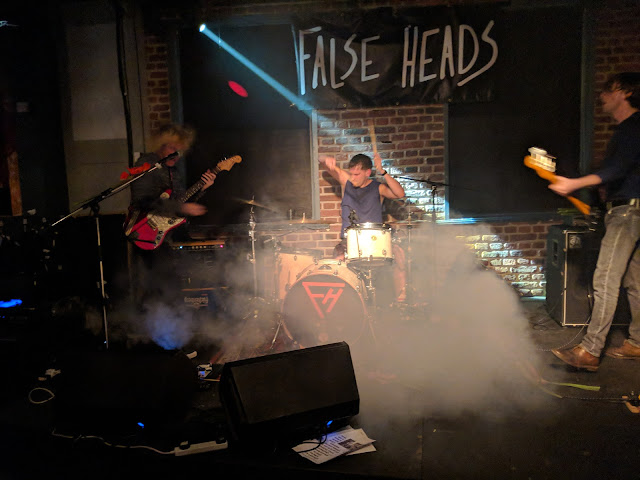 Day 2 was a replica of the previous night, (see above) I'm not going to repeat too much. More new material and more fuck-yeah entertainment.

Being strictly audience participation tonight I didn't take many pics. I did however record some of the treat we got at the end, which I won't be sharing (apologies).

So what was the ending this time? Well even though it was a quiet venue, it didn't stop 'one more song' chant starting. And that's what we got, and it wasn't just another re-run. This was an very exclusive listen to some new material never played, so new there were no lyrics. My god, what a gig to be at. Polar opposite of the previous night, yet equally mesmerising.

I applaud you fellas, and, I, again, remind you, pick up this EP, listen to their previous EPs and follow these lads. They are, they have to be, the next big thing! They are leading a re-generation of the British independent punk/post-punk movement. 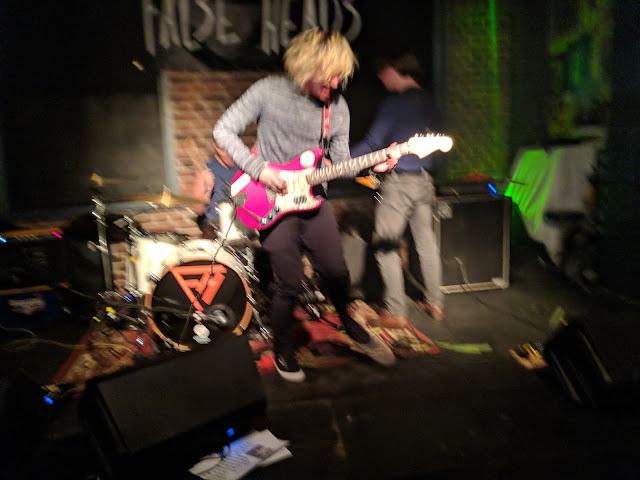 That all said, I want to touch on the support acts over at Preston, firstly Salt The Snail dropped out, I was gutted, they sound amazing and I hear entertainment factor is 90s WWF... WMCYW?

However, as equally bizarre, All Hail Hyena, yep, they came out with sermon style lyric books, action figures on stage, roses, Jackie Chan DVD (*edit* VHS, proper old school), florescent paint and wearing Pajamas... That said these guys can sing and are a tight act, not to be taken serious lyrics, and they kinda take themselves not seriously but can really play tho. I'd like to hear some serious tracks too. Check out track Way Ho! It sums up their funky, fun attitude.

If you've stuck out this far, thank you, if you skimmed and looked at the pics and video, thank you also 😂. Check out the bands and support them.