Deep in the midst of the Tequila binge that was Coachella 2017 are plenty of good stories, many of which will not likely get aired publicly on the net, but for the ones that can here's my take from it.
Coachella 2017 really was a magical tale of extreme proportions. A tale of the Lines we waited in for hours to get in or about. The Weed... well this was Cali exactly 1 year on from 420 - this may also be the reason the catchphrase from 2012 "Have you seen Molly?" was well and truly gone.

To top off the abundance of music (which really goes without saying), was the amazing lighting. Particularly the new bit of tech from Intel - the iDrones. It seems each year there's something amazing. Back in 2012 we saw the Hologram of Tupac, this year was just as good for different reasons. The iDrones were little hovercrafts moving in sync, changing shapes and lighting. Like some never-ending firework display... from the Iconic Wheel to Palm Trees. They certainly turned heads.


Though this Narnia was far from the snow covered lands in someones wardrobe. The dustings on the ground and floating in the air was superheated sand being kicked up by rickshaws and trundling feet! Bring on the alcohol to wash it all away.

Thursday
Getting to know the neighbours is a must. Meeting a group of 18 guys & gals from San Diego with a set up fit for a king was unexpected. Furthermore their bar and free booze (think Tequila) even more so.
Needless to say the Hangover City Limits were clearly visible from their 10car commune.

Between Camp site investigating and remembering your street address there was a whole heap of drama and mistakes day 1. So much so that the arrival has its own post dedicated to it : Arrivals and Mistakes

Friday
Much of this festival saw clashes on almost every set I wanted to see, with a group of people this definitely means compromise

Stormzy or Kungs?
Tacocat - easy choice.
Oh Wonder  or  The Interrupters?
The XX or Steve Angello?
Empire of the Sun or Radiohead? 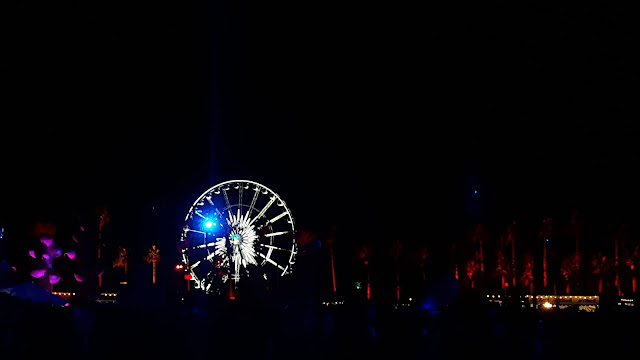 Kungs were the one, but with friends flying in today who wanted to see Stormzy we opted to meet them. Stormzy .. meh I don't rate him either way, although for a Brit opening the Outdoor stage on day 1 he pulled a pretty big crowd - fair play.

Oh Wonder and Tacocat were next, definitely worth a watch even though I'd only hears both of them a few weeks before when spotifying new bands.

Now it began to get tricky The XX or Steve Angello?! Having seen Steve a few years ago and The XX with a new album we definitely needed to go the Main stage to see them - 100% the right decision. Plus its hard not to support fellow Brits.

Admittedly the sound on the main stage on Friday was not right, resulting in extra soundchecks saturday morning for Gaga. Despite this the trio truly scored 10/10 for performance with totally on point vocals!  8/10 Atmosphere, I'm not sure if it was the time of day or some people just waiting for Radiohead but fans sitting down it kinda took away the vibe a little.

Key tracks to take away from the setlist: Say Something Loving,  I Dare You, Fiction and On Hold. 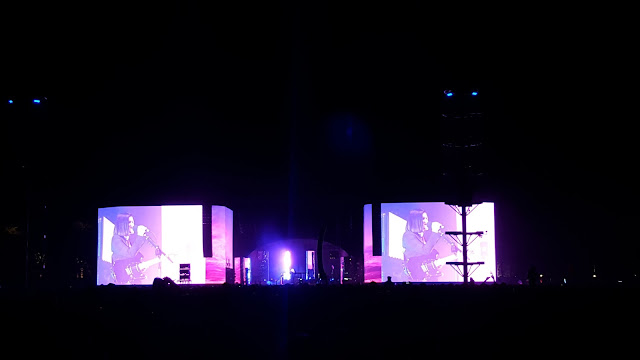 Headline : The Aussies or The British?

Headline acts for Friday was pretty good line up, with Radiohead on main and Empire of the Sun clashing on the Sahara. Got to be honest, Radiohead are the band you see because they are Radiohead... also the band that seems to headline year after year, festival after festival. I'm wondering now how long they can continue that reign, stealing top spots on main stages, particularly with performances like they did in 2017.

Anyway, the group split here. Opting to go see Empire of the Sun at Sahara. Damn we definitely left it late to go get in. Massive let down for organisation here by Coachella, EOTS were far too big to play Sahara - they won't the only band where fans were left feeling out in the sticks.

Arriving 10minutes before due start time we couldn't get within 20meters of the tent, by the time they came on there was no room to move in or out! Bodies pressed together from the Front all the way back to adjoining food stalls.

Empire of the Sun, never fail. Cracking set list and sound, plus 10/10 for atmosphere in the tent. 3/10 outside the tent, with people trying to pass through the splurge of Empire fans, to get from the Bars to the Main stage - massive let down.

After listening to  DNA,  Way to Go  and  We Are The People  the pushing became too much and opted to make our way back to the Main Stage for Radiohead - Big Mistake! I don't need to go into that already well publicised disaster.