I'm going to say in advance. For those thinking TL;DR.(too long; didn't read) Skip to Paragraph 10 if you just want the core review.
Also there is a video of the roadtrip at the end.

This was a roadtrip from Bolton to Lanark and an epic well worth it journey. Anyone interested link to the drive's playlist is here: https://open.spotify.com/...Journey To Weekend Debt


Like Chris said about Alien Ant Farm... We don't go to gigs to blog, we don't go to take notes. We go for the love of music... Indie, Alt, Punk, Metal, Trance, Hip-hop... I don't care! Good music brings people together, and it is that reason we drive 189miles to see a band with a few recorded tracks, in a bar holding about 100 people.

I say a band, I don't mean that lightly, this isn't a 4 piece friends from school - ok maybe it is. But this isn't a band that just knocked together a few good rifts & a good chorus, this is a band that stands out from the very very crowded Indie scene IMO. I've listened to so many bands, and seen many more on bigger stages that haven't a touch on these guys.

In 8 weeks since I came across them, listening to 4 tracks on Spotify and few more on YouTube, I've realised that the true musicians don't come ready packed on your TV, or even picked out on BBC Introducing... sometimes you need to look yourselves. I'm glad I did, I wouldn't be in Lanark stood with 100 people singing along to 4 humble lads playing their songs.

I honestly hope in 6months to see these guys play on a stage with 10,000s, if not more, people singing along. Though actually I'd stand front row in Woody's everytime if it gave me a night like that, I'm expecting that won't be the case soon.

Anyway, we turned up hours early, fuck, not be sitting in a hotel room when Jack Daniels is waiting. Taxi to Woody's, swift one, check out the venue then grab some food.
Way too early! The lads from Weekend Debt were just setting up & got a chance to say Hi and what not. 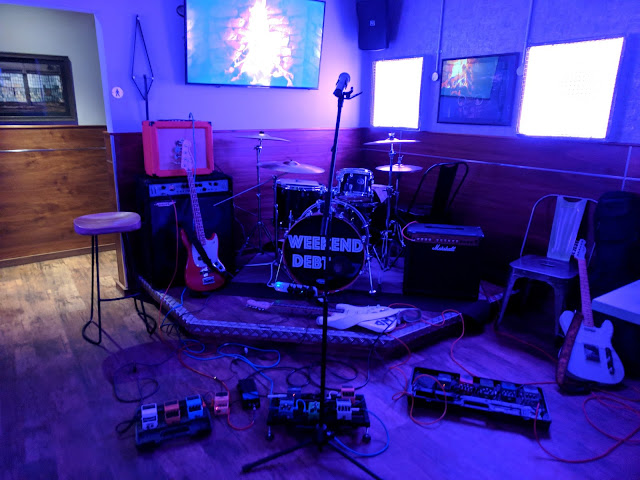 Was buzzin, for sure! It's mad, when you listen to music day in day out and get into it so much that it becomes your daily pick me up - Interpol, Placebo, Stiff Little Fingers, Green Day, Kings of Leon, Weekend Debt, Arctic Monkeys, The Hunna... I expect to see them from afar and don't expect to be having a drink with them.

Food (American diner round corner, pretty good!), Jack. Back to Woody's to chill til they came on.
I think tweeting the journey up made for a good talking point a few people knew who we were (Bolton accents in Scotland, not a hard miss like) Shout out to the lads Callum, Lewis, Michael, I lost track of names of the rest of you all, sorry, cheers for the good night.

Also everyone was friendly as fuck, from The staff at the Best Western Cartland Bridge hotel, to the bouncers on the doors. Who all took their time to chat and tell us about Gentle Giant Music Festival. Or just general chat about favourite artists, music collaborations etc - Projects of Rage?! One for the Collaborations Playlist.

Review starts here:
Woody's is a small bar, pretty upmarket feel but doesn't hold much more then 100 maybe.
It was just us and about 10 people, including the band until 8.30 when it quickly picked up and became full. Price is slightly dearer than other places in Lanark, but still half the price of Manchester! 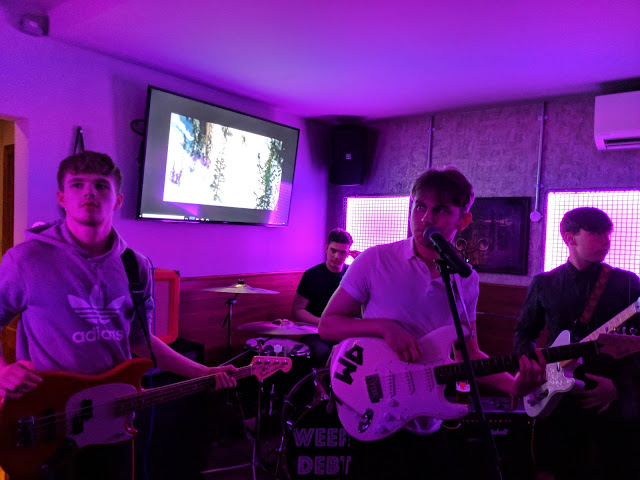 Layouts cool, purple lighting makes for a cool effect but pictures don't look that great cause of it. Also  the position between the stage and the toilet wasn't the ideal of scenarios. Especially when the band came on at 9pm, and it got going.

I don't recall the exact order and playlist, I went to see these guys play and my memorys a little off at the moment. Pretty sure they opened with Paragon, had a few sound issues as Grants Mic was a little low but that was quickly sorted, as well as heavy drums (who doesn't love heavy drums tho).

No gig goes without it's glitches, that's what makes it better, rawer. 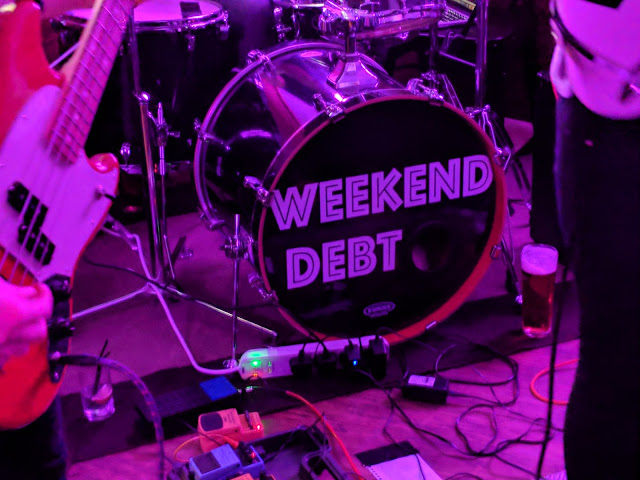 That aside the further in the sound got better, I'd love to say I knew the next few songs but we're limited to to what we had access too, I'd heard Tories and Boiler Room a few times from the King Tuts videos.

The lads were in tune, in time, on point and vocally spot on. Sweet baselines from Russell, excellent solos from Ewan... I could listen to more of them. Can't beat a good guitar solo. Harvey smashing away on those drums rocking some 'trendy' as fuck trouser and white socks ;). Grants Vocals were not off at all, from start to end.

Mid set we got a fucking awesome rendition of Manchester band Oasis' Champagne Supernova, personal favourite of mine so that was mint. The crowd really getting into it and singing along more as the night went on.

Slowing the pace with Magnetic Girl, where Grants Vocals really get shown off.
Back up to a heavy pace and singalong with Boyfriend Averse and Three oh Three (my personal favourite) 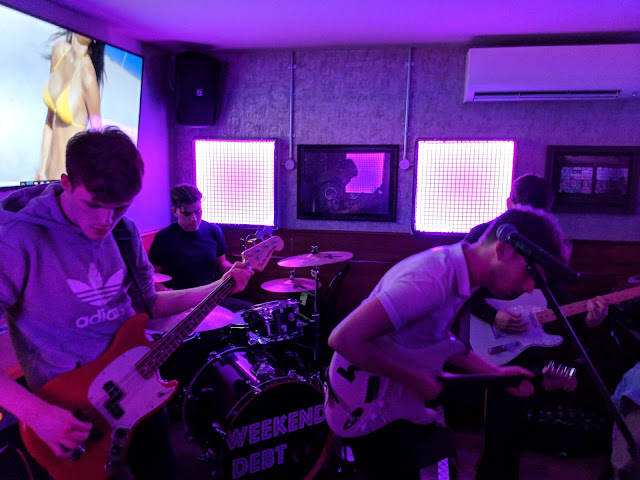 We also got a taste of a new track, which I wish I remembered the name of. It starts in with a funky AF bassline which immediately pulls you in... Game changer here... a few tempo switches throughout, showing some real skills! And solos parts all around. It all happened so fast I now need to wait till it's released to hear it properly. Top notch though.

Overall venue was decent, band was on form, audience were a laugh and Mad With It (Scottish equivalent of Mad For It) what more could you want. That in itself was what we came from and I'd do even just that bit again next weekend if they were on.

What more could you want? Well after, it gave us a chance to speak to lads properly and have a few drinks around with them and their mates. You never know what to expect, they say don't meet your heros because it's generally a let down and ruins it. Now 2 months listening ain't in the Hero bracket, not yet, but could still put a spoiler on your listen if they turn out to be a Grade A c*nt.

Fair to say that was not the case. These guys are true fellas, who are as into their music as you and me. Talking about their inspirations, eclectic music tastes, gaming and general being down to earth.
Welcoming, Friendly, Humble, and worthy of some real recognition.

So what next?
For them... They've got gigs around Glasgow, new tracks in the pipeline and some interesting projects.

For me... I don't know. I've got a few weeks to chill music wise,  hopefully help my bro get his studio going. This trip did make me realise how many people live and love music as much as us, so we'll keep sharing, you keep sharing.

For you...
Listen to their music, follow them on whatever social media you use, get to a gig, share with your friends. I promise you, you will not be let down.
https://www.weekenddebt.com
Spotify Weekend Debt

This is the face of Indie 2018... Or at least they will be the forefront of all my promoting.

have a bob over to richard's blog on this
http://blog.alifeofmusic.rocks/2018/02/weekend-debt-my-view.html 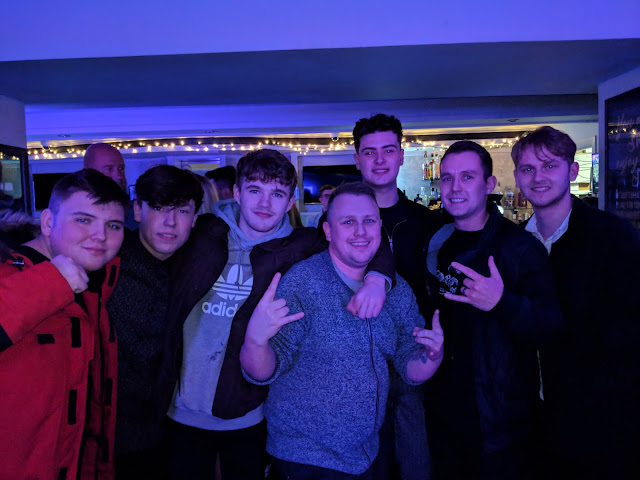 That's all for now!
MICHAEL