Slipknot - We Are Not Your Kind 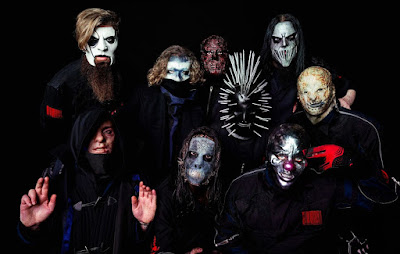 So, how do I define Slipknot? It seems so easy, yet so difficult.


In 2001 I went to see Slipknot, in the TurbinenHalle in Oberhausen, Germany. My Mum drove me and my mate to the gig, in a dark warehouse of a venue. Ozzfest never came to Germany, so we had a sort of "best of". Amen, Mudvayne and Static-X supported Slipknot, who, at the time had only 1 major label release. If I were to define them in 2001, they were an angry, scary group of kids dressed as horror movie serial killers, worshipping Satan, and making a lot of noise. They playfully jumped around the crowded stage, tossing goats heads, pissing themselves, jumping into the crowd, and kicking over drinks at the bar. It was brilliant!


A few months after the gig, I lined up at my local record store on a sunny August morning to get their second album, Iowa. It changed my life! These 9 heroes had somehow managed to make their heavy, scary sound even heavier and scarier.


The following year I went to see Slipknot again, this time in Essen, Germany. This time with 5 friends! This time there were fireworks, a drum kit that span upside down, the new masks looked all professional and they sounded unreal! Against all odds, these 9 weirdos in masks were starting to catch on. 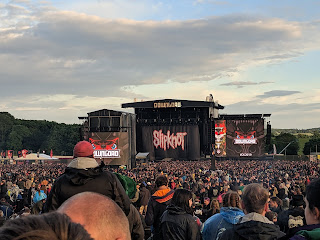 Now, fast forward to June 2019. Somehow I find myself standing in front of a huge stage, once again, waiting for Slipknot to come on and rip a layer of skin off my face. They are now headlining the biggest metal festival on earth. I look to my left and see a kid on his Dad's shoulders with the dreadlocked ghost mask I remember seeing at that sweaty hall in Germany. Slipknot have come so far in 2 decades. They are huge, they are important, they are mainstream, and guess what, maggots, They Are Back!


Their new record came out yesterday. It almost picks up where Iowa left off.


I don't want to take anything away from the albums between Iowa and We Are Not Your Kind. After all, their 3rd album gave use Duality, Slipknot's 'Enter Sandman', their big hit, their dancefloor filler. All Hope Has Gone gave us the epic 'Snuff' along with it's chilling video. The Grey Chapter was also a wicked album, paying tribute to Slipknot's fallen brother, Paul Grey. None of them quite managed to grab me the way Iowa did, though. 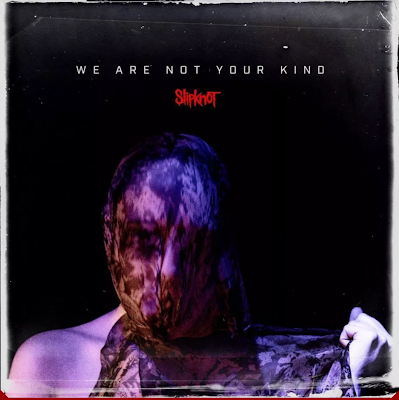 The new album did grab me, but instead of grabbing me by the heart, it grabbed me by the balls, and it hurt! I will admit, the first time I listened, I didn't quite get it. I didn't like it!

I also didn't like Corey Taylor's new mask when I saw it. Which is kind of the point. In 2001 I was finding my feet musically. I was rebelling against the norm. I was doing things I shouldn't because people didn't like it. I was different. I still am, but now I am one of those grown ups I was rebelling against. The feeling of uncomfort I had listening to this new album, was the feeling of uncomfort I was trying to personify back then. Once I figured that out, I was ready, I am back in the mindframe of that 17 year old, and I am ready to have some fun. Isn't music amazing?


So, yeah, the album. We Are Not Your Kind (the title taken from lyrics from All Out Life which came out earlier this year, which, weirdly, isn't on this album) is Slipknot's sixth album. The album is built from the ashes of band conflict, departed members and tragedy, but I'm not here to talk about that, Google it if you want. I'm here to talk about the music, and this record certainly delivers on that front.


Track 1, Insert Coin: Slipknot's albums tend to begin with atmospheric, instrumental, weird intros, and that's what this is. It's a build to something sinister. "I'm counting all the killers" are the only lyrics before we burst into Track 2.
Unsainted was released a few months ago. It became an instant hit. It introduced the new masks, it built the hype for this latest incarnation of Slipknot. A heavy bastard of a song with the catchiest chorus since Duality. Over 4 million YouTube hits in its first day! By the time I saw Slipknot at Download, I had listened to this song so much it felt like an old song. It's ace! Go listen to it! It's the new dancefloor one. It may very well be Slipknot's best!

Track 3, Birth Of The Cruel was released a few days ago. Can a song be deceptively heavy? Because this is! It's slower, it begins with clean vocals, but by the end, it's aggressive and destructive. We are off to a great start!


Death Because Of Death is track 4, and with its 1:20 run time, it serves as an interlude. Chanted lyrics set to a monotonous drum pattern breaks the album up slightly before the next act beings.


Track 5 and this is what I am talking about!!! Nero Forte is a beast! It's my track of the album! It's so familiarly Slipknot, fast, growly, painful verses! The chorus is something brand new though, a high pitched angelic line followed by an aggressive growling hook. Insane military drumming, chunky power riffs and lyrics that basically scream Fuck You! This is what I wanted! "You can do your worst to me, at the end of the day that's what you do best".


Critical Darling is up next. This is very much a paint by numbers Slipknot song. The big verses are loud and fast, the chorus is catchy, and the whole thing builds to a pumping final burst. You know what you're getting with this, and it's so simple to see why today's metal bands have really followed the flow set by Slipknot. This will be loved by the old faithful!


If Critical Darling is the typical Slipknot song, Track 7 is something totally different. Broody and moody, A Liar's Funeral is deep and depressing and very experimental for a band who have definitely settled on a sound.


Red Flag follows, and we are back to normal. The lyrics, again, take centre stage, but the distinctive guitars supplement them perfectly while the drums will give your heart a good work out. This is heavy! Proper heavy! One for the gym, but nothing special.


Track 9, What's Next is our second interlude. It serves as a mini intro for Spiders. Almost childlike piano keys sound like they are straight from a horror film. I'll admit I didn't like Spiders at first. It's weird, it's not what I wanted to hear, it's almost a pop song. I found myself listening to it again and again. It's good fun! My wife told me I don't like change, she is right. Change is good. I'm gonna end up listening to this the most!


Track 11 already? Now this song, Orphan, sounds like it was ripped straight from Iowa! It's brutal, it's certainly Slipknot! The machine gun drums and screechy guitars are so familiar, and once again, a funky chorus that will bleed its way into your brain, before a screamed "I am the Orphan, The one who kills your world" bridges us back to the quick verses.


I wouldn't recommend listening to the next track alone in the dark. My Pain is scary as shit. A low hum is followed by a rhythmical chiming, before the lyrics creep in to freak you out. This is straight from the head of that psychotic Clown, M. Shawn Crahan. It's fucked!


Track 13 slowly builds up afterwards. Not Long For This World, features the clean vocals we have grown to love from Corey Taylor's other band Stone Sour, however, this is still a Slipknot song, and it's the atmosphere that makes it feel that way.
A band that have 9 members have the tool 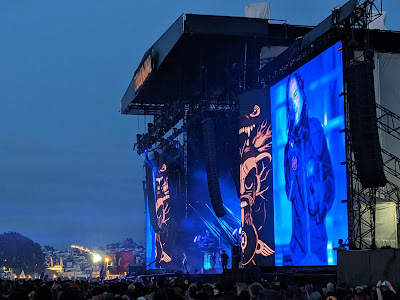 s to do things differently. The 3 drummers are so prominently featured throughout this whole album, Jay Weinberg sits behind the main drum kit, while the Clown and the mysterious new anonymous member clamber all over their custom designed kit of barrels and bass drums, while providing backing vocals for lead vocalist Corey Taylor. The duo of guitarists, Mick Thompson and Jim Root keep the whole thing sounding rhythmical and distinctive. But the atmosphere is what sets this band apart from other bands and that is provided by bassist V-Man, and the 2 DJs Craig Jones and Sid Wilson (who's new mask is SICK).


It all comes together for the final track, and the 3rd track I had heard before the album had come out. Solway Firth isn't the full stop at the end of an essay, it's the middle finger at the end of the rant. If the album serves as an angry outburst, this song is the punch in the face! It's toe curlingly heavy, and it's an assault on all your senses.