The Sherlocks - Live for the Moment album

The Sherlocks vibe is very much Indie/Alternative, think The Courteeners and Arctic Monkeys blended. The clean indie guitar rifts, memorable lyrics with a Yorkshire Twang.
For a band who supported Kings of Leon on their UK tour earlier in the year, you'd be surprised to hear they have only just released their first album.

I've waited nearly 2 years for this album. I came across these fellas in the line up of Dot-to-Dot Festival 2016 and managed to find a few tracks on YouTube & Spotify. It's been a tease of 1 track every few months - which is great but I want an album. 8 tracks drip fed just doesn't feed the craving

Lets get to it... the album art is simplistic, dark with a Multi-coloured hummingbird on the front. The inlay comprises of various polaroid style pictures of the band members, Kieran, Brandon, Andy and Josh, as well as a lyric book. 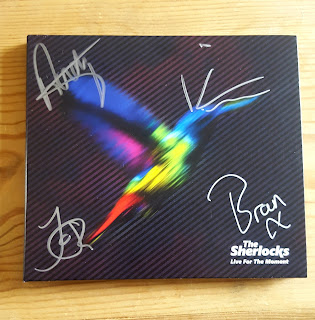 The album starts with Will You Be There, very good track released as a single late 2016. It sets the tone for the album which works for these lads. Indie Alternative rock of the millennial, 4 piece singing in regional accented and it's much their style.

Live for the Moment and Escapade continue the catchy guitar riffs and well paced drums. Personally I think the Single version of Escapade is better, this new version has moved the drums and bass to the background and focused on the guitar and lyrics.

Much of the album I've heard from the singles and is top tune after top tune following much of the same formula with lyrics resonating to that of much of Englands 20-somethings growing up, trying to enjoy life but adult at the same time. I'm not going to comment too much on those, they really do need a listen to appreciate.

Turn the Clock  is the first track we get a notably different style, with a slow paced chilled drums and longer drawn out guitar notes, with the additions of a harmonica and violin its a nice variety

Motions also adds new sound, again much slower paced and starting with an acoustic intro, then the funky bass and harmonies kick in. I was worried when the album came it may become much of the same but these two have shown the lads have a bigger range than the singles showed.

Ending on Candlelight a 5minute track which again is a little slower than the first half of the album, here we truly see the length of range in Kierans vocals and the lads too. With the track drawing on the string instrumentals to build it up. It sees the band and violins round off the album with a long fade out.

Track list:
Will You Be There?
Live For the Moment
Escapade
Chasing Shadows
Blue
Nobody Knows
Was it Really Worth It?
Turn The Clock
Last Night
Heart of Gold
Motion
Candlelight