Well finally the post gig blues have gone so I can give my view on Weekend Debt.

I will start by saying I actually had a view, I forgot how much I love the smaller gig, I was close enough that I had to reign in my jumping around so that I didn't take out the bass player

The gig took us up to Scotland on one hell of a road trip, there was lots of laughs, the occasional slamming on of breaks (god damn traffic cones) and a soundtrack taking us back to our misguided youth! If you ever get a chance to go to Lanark for a night out I can highly recommend it, the people are awesome, just be aware everywhere shuts at 1am and some bars just shut at 11 because they are to busy (this was a first for me). 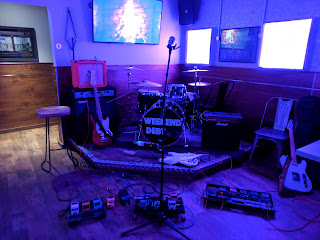 The gig itself was in a bar called Woody's which had a purple ambience (check out the photos you will know what I mean) a small stage but a large bar area which we made sure to check out immediately upon arrival, £6 for two JD and Cokes, I visited it a few times...

Weekend Debt took to the stage at about 9 and well just blew me away. I have seen lots of  up and coming bands over the years and none of them have sounded as finely tuned as these guys, they are just switched on from start to finish. 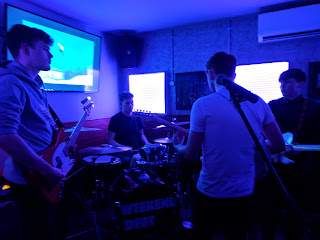 They opened up with Paragon which got everyone there going immediately and then followed it up with a couple of songs that I haven't heard before but I will be badgering them to get me copies of it sent down! Next up came boiler room which is an awesome song in itself but the lads dropped Oasis's Champagne Supernova in the middle of it which I was taking as a nod to me and Michael for our long journey up (they smashed it by the way, something weirdly wonderful hearing it belted out in a Scottish accent) this was followed by a cover of Scissor Sisters Laura (a personal favourite) and then it was time to take it slow with magnetic girl, as Michael points out in his review this is where Grants vocals really come out and gave me a chance to catch my breath (aint getting any younger). For the final two songs came Boyfriend Averse and Three oh Three, pure genius and played with the same fever as the recorded tracks. The whole set was awesome, if you get chance to see these guys don't even hesitate, I am hoping to see them start coming further South where I will definitely be going to see them. 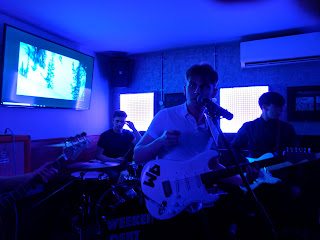 Once the set was done and the kit cleared away the lads came out for a drink, well actually they took us out as we had no idea where to go! They are a great bunch with some awesome friends, everyone wants to see them do well including me, meeting them only makes me even more confident they are going to be big, just hope that when they are they don't forget where they came from and still go back and play one off warm up gig's at Woody's as I want to go back there and have a "Mad Wir It" night! 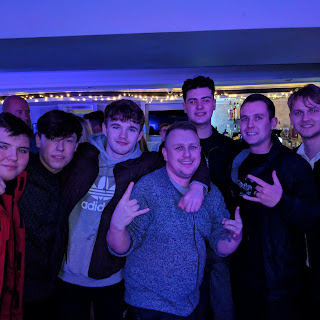